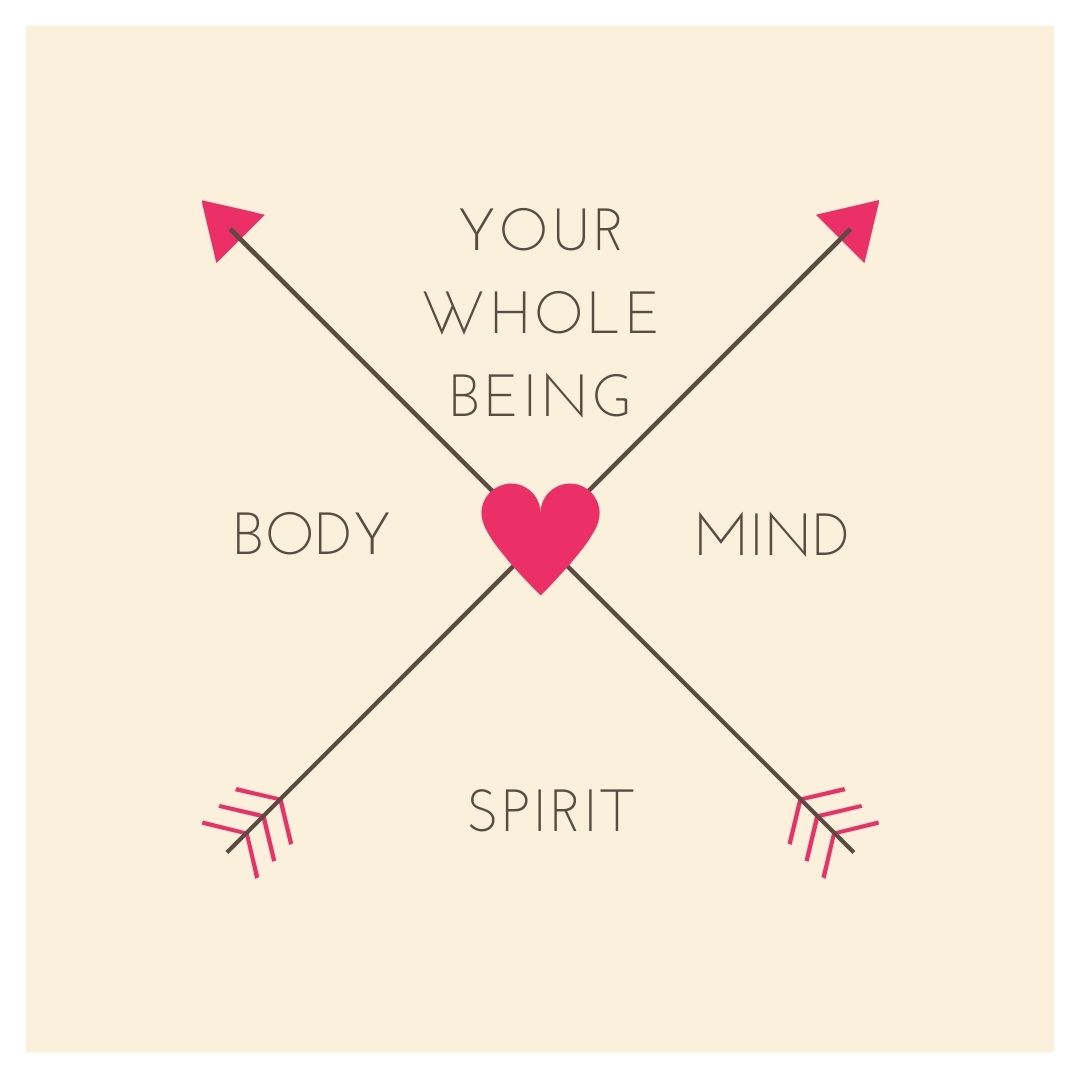 Although many people think that they are a body with a spirit, in reality, we are a spirit inhabiting a body. We came to this planet Earth for one purpose – to raise our consciousness to recognize our eternal union with the Creator. We do it when we learn to live from love and not from fear.

To be in this third-dimensional world, we need a physical body. In turn, we create our experiences, which we call our life, through the mind and the thoughts that we hold regularly.

Therefore, you cannot lose perspective that you are body, mind, and spirit. Feeding these three areas is the foundation of the holistic philosophy. If you ignore any of them, you are incomplete. It doesn’t matter where you start as long as you include all three.

We are in the last stage of the third dimension, where the planet and its inhabitants will rise, little by little, to the fifth dimension. To achieve this, we have to refine our bodies and cleanse our minds of all negativity, living primarily in love.

I will dedicate the following blogs to explain how we can help ourselves balance in mind, body, and spirit. I invite you to read them. 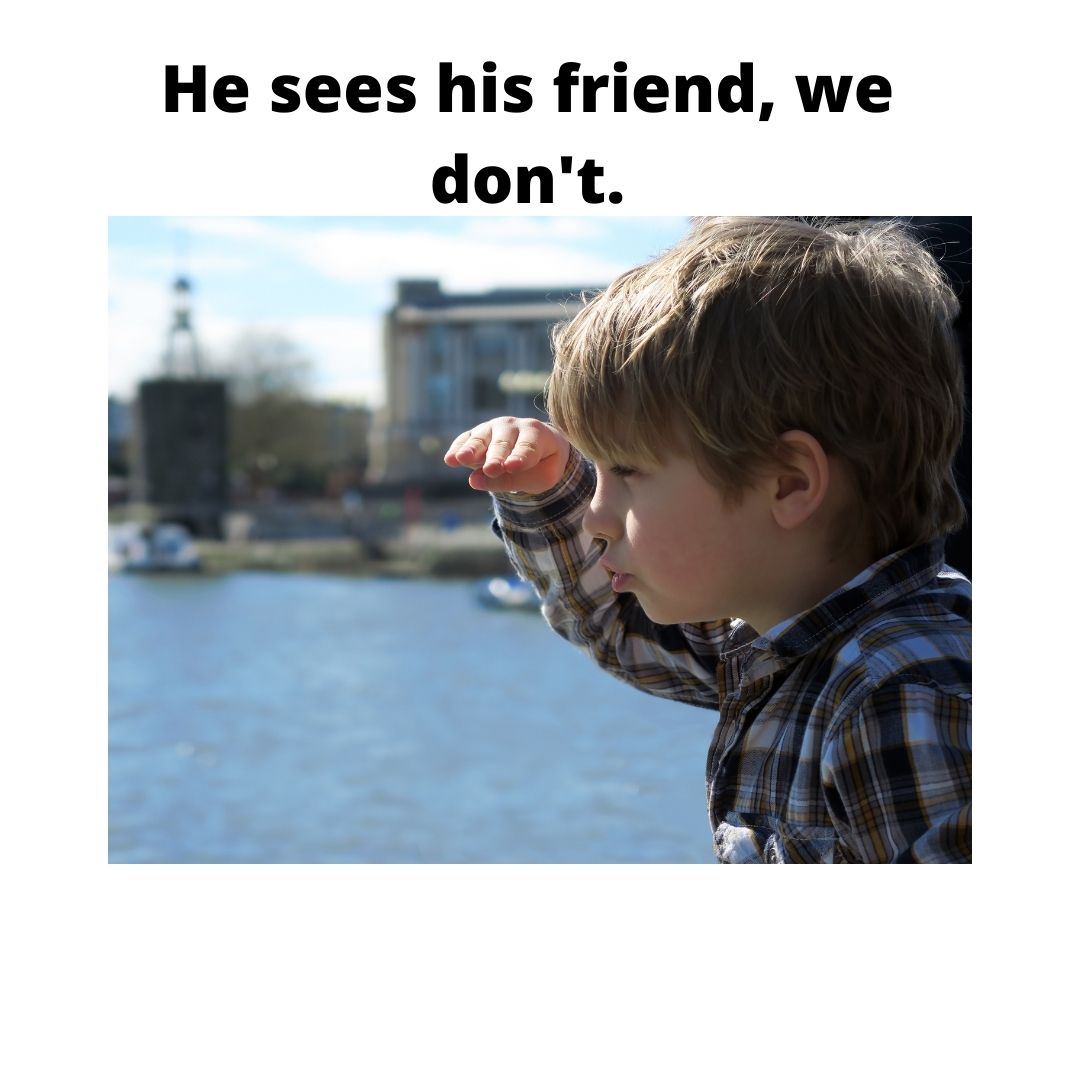 When we are born into this third-dimensional world, we come with what I call the veil of oblivion. That veil does not allow us to remember the previous experiences that our soul has lived. In this way, we can do the work that we came here to do of raising our consciousness without being distracted by past memories.

When a baby is born, there are two soft areas on the top of the head where the bones of the skull have not yet joined. These areas are called fontanelles.

From a physical point of view, this allows the baby’s head to move through the birth canal, which is very narrow. Little by little, the bones of the brain come together, and the fontanelles close.

From a metaphysical point of view, this allows the baby to still contact the higher planes since their veil is not entirely closed. Things being this way, children can see beings in other dimensions that adults do not see.

This “friend” helps the child in their emotional development. It is someone with them and someone who understands them. Parents should validate what they see, not criticize them or tell them that this friend does not exist.

I remember a two or three-year-old boy playing in his home, an apartment on the sixth floor. His grandmother came in, and he told her, very calmly, that a man had entered through the window and was with him for a while. The grandmother thought it could have been the grandfather, who had never met the child. He had just died, and she thought he came to see him before leaving for other dimensions. We’ll never know whether or not it was the grandfather, but that the child saw and described him, that did happen.

Like this one, I have heard many stories. I invite you to open your mind to the fact that there are many dimensions, and support children who have access to them. After the age of seven, the veil is entirely closed for almost everyone. Some people who have the joy of staying connected have a gift. We, as parents, must help them to cultivate it.

Effective today I will publish the blogs every Monday. 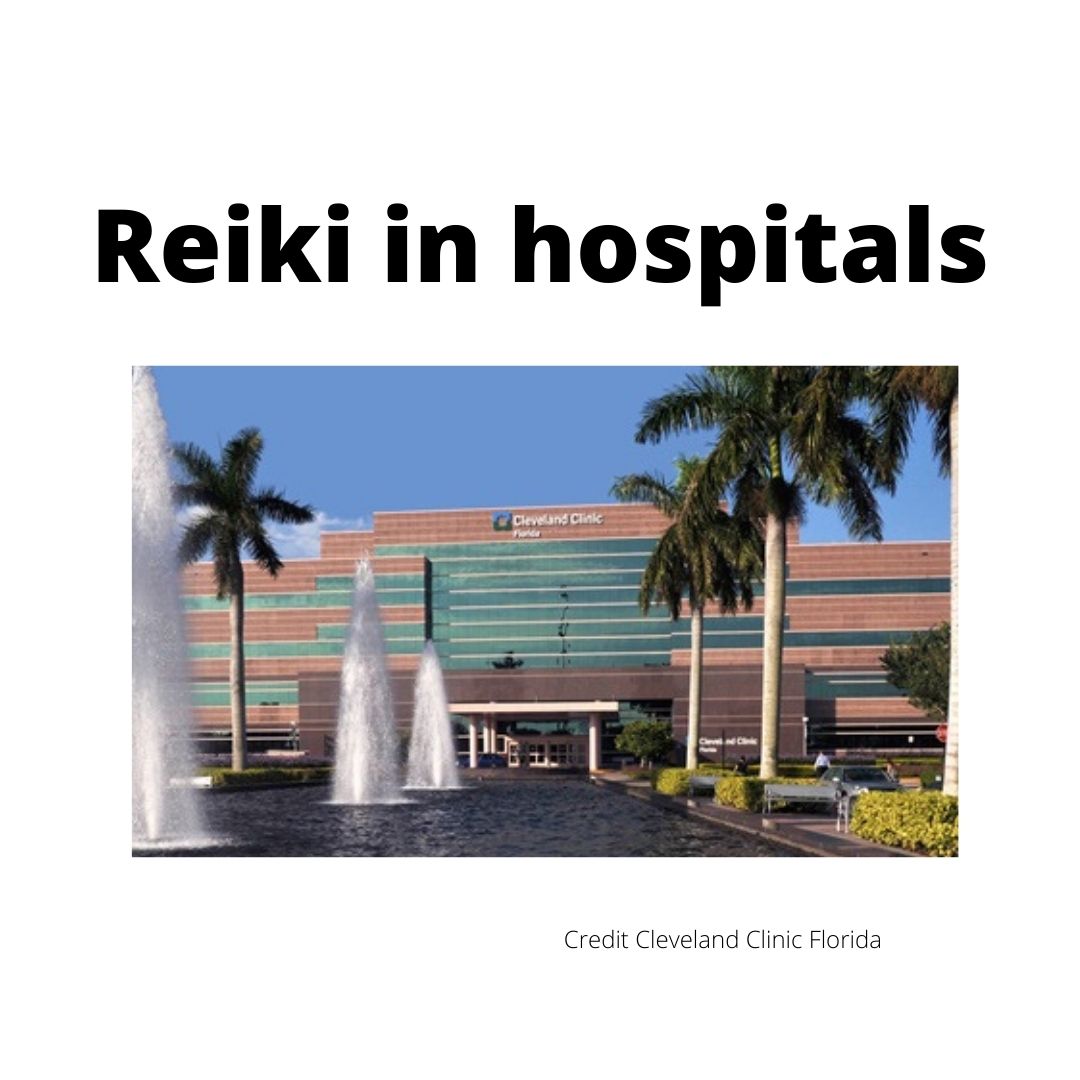 For many, many years, most people walked through life like robots. They worked or went to school during the day. They came, ate, were distracted by something, and went to sleep. The next day the same.

They took as true what was taught in schools or read or heard on the news. On Sundays, they went to church, and so the days, weeks, and years passed.

Little by little, humanity has been slowly awakening. Scientists already talk about quantum energy. Eastern spiritual beliefs were reaching the West. It is already normal to talk about yoga, meditation, acupuncture, and Reiki.

Lately, mainly at patients’ request, many hospitals are including Reiki treatments as part of alternative therapies.

The National Center for Complementary and Alternative Medicine (NCCAM) places Reiki therapy in the bio-field energy category. Bio-field energy is any electric or magnetic field produced by a biological organism. E.g., a human.

What are the benefits of Reiki?

• Increases our energy level, providing us with physical and emotional vitality.

• Causes a very pleasant state of relaxation, reducing or eliminating anxiety. A Reiki treatment helps a lot before and after surgery.

• Decreases the side effects of medications and treatments, such as chemotherapy.

Many years ago, a dear friend had cancer. The side effects of chemotherapy were horrible. When I found out, I offered him Reiki, and even though he thought I was crazy, because he trusted me, he allowed it.

Days later, he called me to tell me about the big difference in his well-being after chemotherapy. He said that the side effects were greatly diminished. He asked me if I could attune him and his wife to Reiki, so he could receive a Reiki treatment before and after the chemotherapy.

Eventually, my friend died. However, his quality of life through the end was vastly better than what he had before Reiki.

Before moving to California, the Cleveland Clinic in Weston, FL was looking for Reiki therapist. Also, in many hospitals, nurses and, even doctors are being attuned to Reiki.

I hope that people continue to wake up to this gentle but powerful therapy. 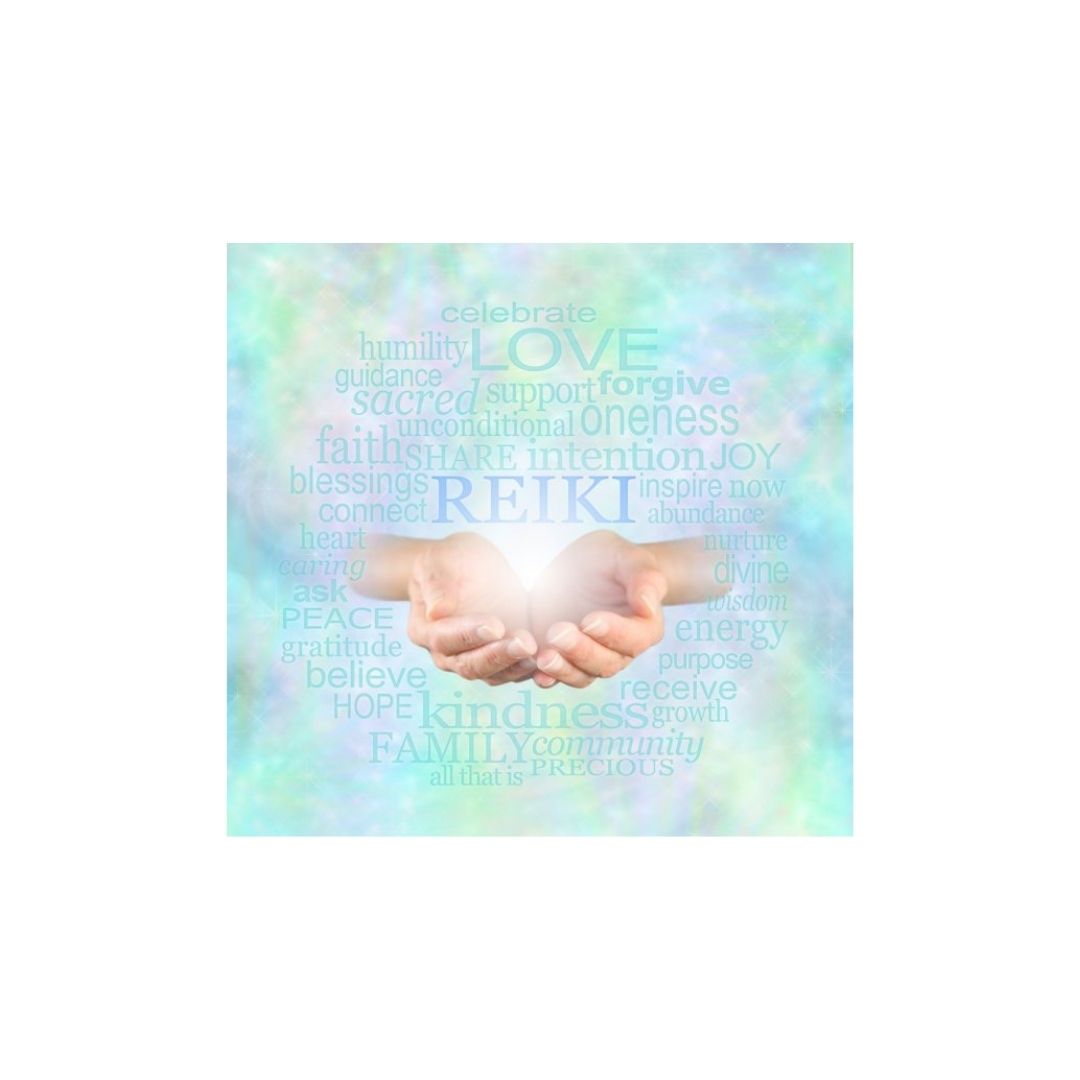 (This is a continuation of the previous blog.)

When I attuned to Reiki, the process of becoming a teacher was quite expensive. Years passed, and the price went down. One fine day, my inner voice began to tell me to become a Reiki master. I had already committed myself to listen to that voice, no matter what it said to me.

I started looking for someone to teach me when I opened the newspaper and saw a one-page ad for a Puerto Rican Reiki teacher, Reinaldo Torres (R.I.P.) Reinaldo lived in Tampa and came to Puerto Rico to teach Reiki III or master classes. I called him in Tampa, and after a beautiful experience in his classes, I became a Reiki III master.

Reiki was brought to the West from Japan by Ms. Takata, of Japanese descent but a resident of Hawaii. She tried to have something so sacred be respected and valued in the United States, and the western world. In order to achieve this, Mrs. Takata established a series of rules about prices and initiations. I’m going to call this Traditional Reiki.

In Reinaldo’s class, I learned that over the years, Traditional Reiki was softening, and changing a bit. With Reinaldo, I learned to attune people in the traditional way that includes four attunements. Also, I learned how to attune with an additional symbol that allowed only one attunement. I had never heard of this before, so the question remained in my mind if that form worked.

Soon after, I went to my hometown, Ponce, and visited my sister. When I arrived, I found out that her husband was ill and was in a lot of pain. I told her that I had become a Reiki Master and could teach her to give Reiki to her husband to help him with his pain. She was my first student. I had never taught a Reiki class.

Since I was in a hurry, with a bit of apprehension, I decided to go with the single attunement system and prayed that it would work. After I attuned my sister to this extraordinary energy, I told her to practice giving Reiki to me so in case she had any questions I would be able to answer them.

In Reiki, the hands are placed with the fingers close together so that the energy doesn’t escape through the open fingers. After about five minutes, she asked me if it was indispensable to have the fingers together. I remember I told her that nothing was indispensable, just preferable, and I asked her why she was making that question. Her response, which amazed me, was, “it’s because I’m burning.”

Again, neither before nor after had I heard such a thing. I thanked my Reiki guides because I’m sure they wanted to let me know that this new way of attunement worked very well. Since then, that is the one I use in my classes.

It is wonderful to know that if we learn to listen to the messages, our inner voice or spiritual guides direct us at every moment.