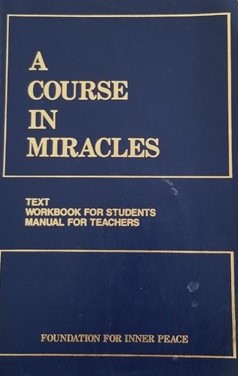 Let me introduce you the book that changed my life

In 1965, Dr. Helen Schucman, and Dr. Bill Thetford, both psychologists and agnostics, were colleagues at the School of Medicine and Surgery at Columbia University in New York.

One day, Helen began to have a series of psychic experiences. She called Bill and told him that an Inner Voice did not leave her alone saying, “This is a course in miracles. Please take notes.” Bill suggested that she take notes and decide the next day if it made sense or not.

Helen did this, and the process lasted seven years. Helen listened, wrote and both transcribed. The dictation was not automatic writing, nor was Helen in a trance. The Voice, which called itself Jesus, could stop while Helen continued her work.

The manuscript, which is a teaching of spiritual psychology, was called A Course in Miracles (the Course). It is composed of:

The Course’s mission is to help us achieve inner peace. Its goal is to teach us to eliminate the mental blocks that do not allow us to see our true essence, which is love.

The teachings of the Course have been so impressive that it has been translated into almost all the major languages.