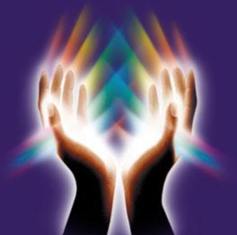 When I think of something gently powerful, the first thing that comes to mind is Reiki. And you might think, so what is that? The word Reiki comes from two Kanjis or characters that are used in Japanese writing to express concepts. In this case, Rei means sacred, spirit, soul, divine, and Ki means energy. I call it God’s energy, which dwells in each one of us and everywhere.

Reiki is a thousand-year-old therapy by laying on of hands that balance the physical, emotional, and mental bodies. Reiki is not learned by reading a book. The ability to give Reiki is passed from a Reiki Master to the person who is being initiated. This is done in an attunement process or initiation. In the initiation, the channels in our hands are opened to allow the Reiki energy to flow through them.

Like everything related to Reiki, the initiation is a gentle and sacred process. Once you are initiated to Reiki, it is for life. Even if you haven’t used it in years, the energy is activated with sheer intention. It enters through the crown chakra and leaves through the hands, which feel warm once the Reiki begins to flow.

Contrary to other therapies by laying on of hands, when you do Reiki you are not using your own energy. You are a channel, like a hose is when water begins to flow. Therefore, your energy is not diminished, and you don’t attract the energies of the other person to you.

Reiki has three basic levels. The first level is by laying on of hands in certain positions of the body. You can do it to yourself or someone else.

The second level is Reiki at a distance. Here three symbols or Japanese kanjis are learned that serve various purposes, including sending Reiki from a distance, no matter where the person is.

The third level is the level of mastery that some teachers divide in two. Here the students are attuned to other symbols that allow th, in turn, to attune people who want to learn this ancient technique.

My experience with Reiki started quite early at the beginning of my spiritual quest. At that time, I was so hungry for knowledge that I would go wherever there was a class on any topic. So I took the first level of Reiki out of curiosity.

It wasn’t until months later when I was going through a difficult time that I decided to use Reiki to calm my emotions. As a lawyer, at that time I needed evidence to believe things. It’s as if my Reiki guides said, you need proof, well here it goes. About 15 minutes after putting my hands on my body in the Reiki positions, I began to feel a powerful energy that went in a circle from head to toe and rose from to toe to head. I have not felt energy this strong before nor after, but that convinced me that something was happening. From then on, I began to give myself Reiki treatments.

In the following blogs, I will continue to tell you about my experience and how I was initiated in the other levels until I reached the master’s level.